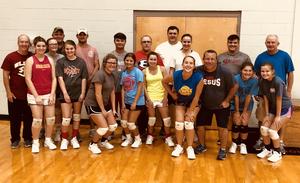 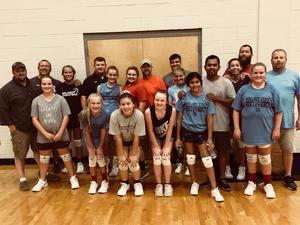 Belmont Volleyball likes to have a “kick-off” night for their players and parents each year. This year, the athletes wanted to play their dads in a fun match. On Monday, July 30th the coaches provided a meal from Sparks Drive Inn for parents and athletes. SWAT Volleyball Coaches, Mrs. Lanice White and Mr. Will White, came to our kick-off and presented an “Introduction to Volleyball” for parents. They also discussed SWAT club ball and how to earn a college coach’s attention. Then, Mrs. Karen Sparks gave an inspirational devotion. As a finale of the night, dads played their daughters in a volleyball set. The JV players and dads played a very intense game, but at the end of the match, the dads came away with the win 25-23. The Varsity dads did not stand a chance. The players won their match 25-13. The dads and daughters laughed and smiled together. Thanks, dads! Both dads and daughters are ready for the 2018 season to start